Authorities say that the initial crash took place at 5:54 p.m. at the intersection of Van Buren Boulevard and 56th Street. According to reports from the California Highway Patrol, that accident investigation was being handled by two members of the Riverside County Sheriff’s Department. CHP Riverside spokesman Juan Quintero identified the two as a community service officer and a volunteer, though their age and gender were not disclosed.

About an hour later, an Amazon Prime delivery truck was traveling southbound on Van Buren when it collided with the unoccupied patrol vehicle, Quintero said. However, the force of the collision pushed the patrol vehicle into four nearby pedestrians. Two of the people struck by the vehicle were the Riverside sheriff’s personnel, and both were transported to a local hospital with major injuries but are expected to survive.

The other two victims hit were the drivers of the vehicles involved in the first accident, Quintero said. Both of those victims sustained critical injuries and died at the scene. They have not been identified.

The driver of the Amazon truck was transported to an area hospital via ambulance and has minor injuries. No charges or citations have been filed at this time.

The accident investigation is ongoing, and anyone with information is asked to contact Officer C. Mogi of the California Highway Patrol. 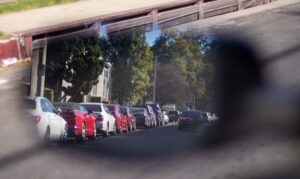