Fremont, CA – Alonzo Mendoza Killed, One Injured in Four-Car Crash on I-880 at Warren Ave

Home » Fremont, CA – Alonzo Mendoza Killed, One Injured in Four-Car Crash on I-880 at Warren Ave

Fremont, CA (February 3, 2021) – A man was killed and another person was injured on Wednesday morning, February 3rd, in a chain of vehicle accidents on Interstate 880 that left one car engulfed in flames, authorities said.

Per a report released by the Alameda County Coroner’s Office, the man killed was identified as Alonzo Mendoza, 20, of San Jose. He was the only occupant of the car that caught fire, officers with the Alameda County Police Department said. The fatal accident happened around 12:30 a.m. on Interstate 880 southbound near Warren Avenue.

Troopers with the California Highway Patrol, also on scene, said that Mendoza’s Ford Mustang was hit by another vehicle. The Mustang spun and came to a stop in another lane, where it was hit by a Tesla and then by a Ford Fusion. At that point, Mendoza’s Mustang caught fire, CHP Officer Dustin Kennerly said.

The driver of the Ford Fusion suffered a broken leg, and the Tesla driver declined treatment, authorities said.

Kennerly said the collisions and death remain under investigation but it does not appear at this time that drugs or alcohol were factors.

Our deepest condolences go out to the family of Alonzo Mendoza. Our thoughts are with the injured victims in hopes of a full recovery. 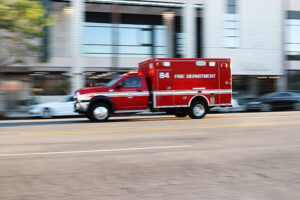