San Jose, CA (August 4, 2021) – A man has died after sustaining injuries in an auto-bicycle accident that occurred Monday evening, August 2.Per reports from authorities on the scene, a Jeep driver hit the man as he rode his bicycle through an East San Jose intersection. The wreck was reported around 11:00 p.m. Around that time, the bicyclist was traveling northbound on North Jackson Avenue when the driver of a 2014 Jeep traveling westbound on McKee Road hit him.

The Jeep driver stopped at the scene and cooperated with authorities. The injured man was transported to a local hospital via ambulance in serious condition. He died Tuesday, police said.

His name has not been publicly released pending his formal identification and notification of his next of kin. Authorities with the Santa Clara County Medical Examiner-Coroner’s Office will release his name this week.

The investigation is ongoing, and police say no charges or citations are pending at this time.

We would like to offer our deepest condolences to the family of the deceased victim. 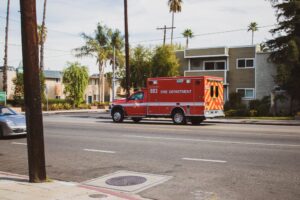 But the victims and their families affected by these wrecks can seek help from a San Jose accident attorney. A skilled attorney in California can help victims seek justice and the fair compensation they deserve after suffering in an accident that occurred through no fault of their own.

Our San Jose injury and wrongful death lawyers at Halavanau will gladly review the facts of your case and tailor our advice to match the specific needs of your case. We have years of experience when it comes to fighting for victims and their families. If you’ve been involved in a crash caused by the negligent actions of another driver, contact our accident attorneys in San Francisco today at (415) 692-5301 or Halavanau.com to schedule your consultation.