San Francisco, CA (March 6, 2021) – Officers with the San Francisco Police Department are looking for a vehicle they say may have been involved in a collision with another car that hit and killed a pedestrian on Tuesday afternoon.

Authorities say that the incident happened on Tuesday around 1:00 p.m. at Mission Street and Geneva Street. At that time, officers were dispatched to the scene and found a 79-year-old woman lying in the roadway after being hit by a car.

The victim was transported to Zuckerberg San Francisco General Hospital via ambulance but later died of her injuries, police said. The driver of a red Honda sedan, an 83-year-old woman, stayed at the scene and cooperated with authorities. Investigators are now seeking a second vehicle that may have been involved in a collision with the Honda before the pedestrian incident. The vehicle is described as a black Ford pickup truck with tinted windows.

The Ford may have right rear damage from the collision with the Honda, police said. Anyone with information is asked to call San Francisco Police Sgt. Luis Oliva at 1-415-553-1641. 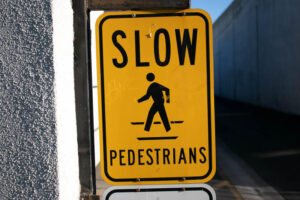