The incident occurred at the Sierra Madre Apartments, which had as many as 60 residents, and is owned by the Tenderloin Neighborhood Development Corporation. Officials with the organization say they are already working to relocate tenants into other available units.

Firefighters were on the scene, located at 421 Leavenworth Street, around 5:00 a.m. and helped rescue about 20 residents. Several were hospitalized with burn injuries and smoke inhalation, ranging from moderate to minor, but the victims are expected to recover.

The incident remains under investigation, and SFPD officers say the cause of the fire is still unknown.

Our thoughts are with the injured victims and everyone affected by the fire. We hope for their full recovery. 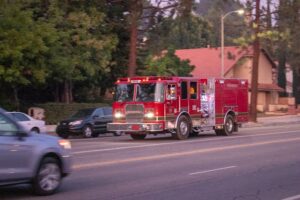 According to researchers and officials from the American Burn Association, nearly 3,000 deaths occurred from residential fires across the country. Furthermore, authorities say that almost 600 more fatalities result from crash fires and other sources, including apartment fires, wildfires, and beyond. In fact, one civilian dies in a fire every two hours across the United States. Though deadly wildfires are arguably the most common type of blaze in the Golden State, residential or private building fires are responsible for hundreds of injuries and deaths each year.

Burn injuries are all too common in California, from wildfires to house fires and beyond. When several people are hurt in these fires, which are typically caused by someone else’s reckless or negligent actions, they may have to cope with insurance companies, long-term physical suffering, and exorbitant hospital expenses. When victims die as a result of severe burns, their grieving families are left to cope with emotional trauma and financial difficulties, such as covering funerary costs and expensive hospital bills, in the aftermath.

However, the victims and their families affected by these devastating California fires may have legal recourse. If you’ve been injured in a fire that occurred due to the negligence of another party or lost a loved one in a fire, you should seek help from a California injury attorney as soon as possible. A skilled attorney in the Bay Area can help victims seek the justice they deserve and the fair, full compensation to which they’re entitled after suffering in a tragic incident that occurred through no fault of their own.

Gene Halavanau at Halavanau Law Office has years of experience helping victims and their families after they’ve been affected by these devastating circumstances. At Halavanau Law Office in San Francisco, our legal team can help you collect the maximum amount of compensation available to cover your losses. By securing your fair settlement, you can avoid spending tens of thousands of dollars of their own money after a fire. If you’ve sustained injuries in a fire, don’t pay out of pocket for the careless or negligent actions of another party. Please reach out to our attorneys in the Bay Area today at (415) 692-5301 or Halavanau.com. Contact us to schedule your free, no-hassle consultation, and learn more about your options after a fire in the Bay Area.

Disclaimers: The purpose of this accident news post is to bring awareness to drivers in and around the Bay Area about what they should do if they are involved in an injury accident. We hope that readers will use an abundance of caution when operating a motor vehicle to avoid being involved in a serious accident. This news post is not intended to be a solicitation for business. None of the information in this post should be considered medical or legal advice. Make sure to talk to a qualified personal injury lawyer if you have been injured in an accident through no fault of your own. The picture used in this post is not from this accident scene.