Danville, CA (July 20, 2021) – An assistant coach for the New York Jets has been hospitalized in California after suffering serious injuries in a bicycle accident that occurred over the weekend.

According to the reports from local authorities, the man, identified as Coach Greg Knapp, is currently in critical condition. He was struck by a vehicle while riding his bike on Saturday, July 17, near his home in Danville around 3:00 p.m. EMS units responded to Dougherty Road and Bollinger Canyon Road, and paramedics rushed Knapp to San Ramon Regional Medical Center before transferring him to John Muir Medical Center in Walnut Creek.

A San Ramon Valley Fire Protection District spokesman said that police said that the driver involved stayed at the scene and cooperated with authorities, though it’s unclear if charges are pending. Officers with the Danville Police Department say they are still working to investigate the circumstances causing the collision. Further details have not been released at this time.

Our thoughts are with Greg Knapp and his family. We hope for his quick and full recovery. 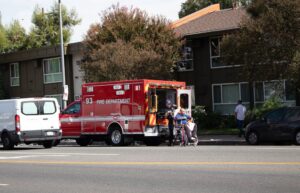